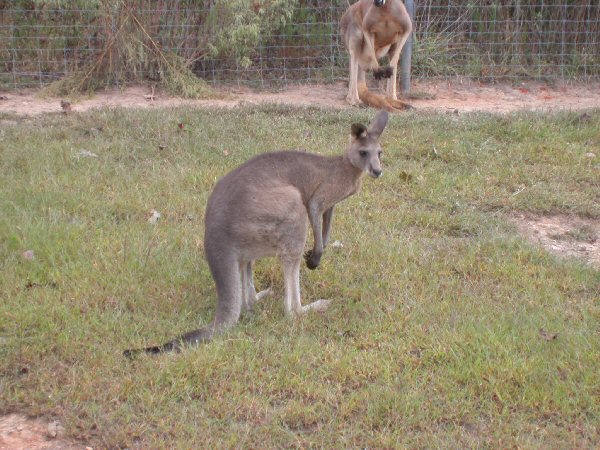 First off, a little truck ride through the compound to check out the inhabitants. 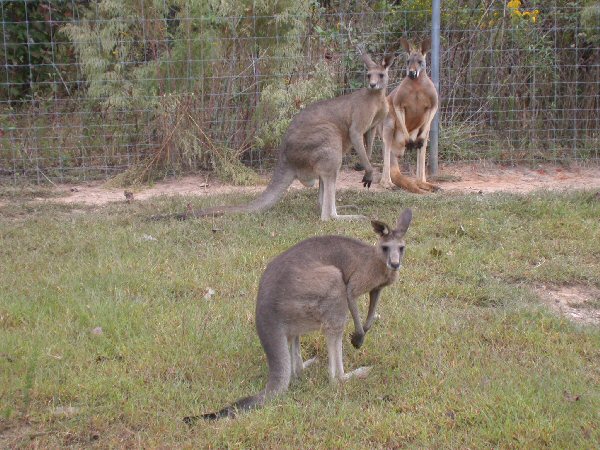 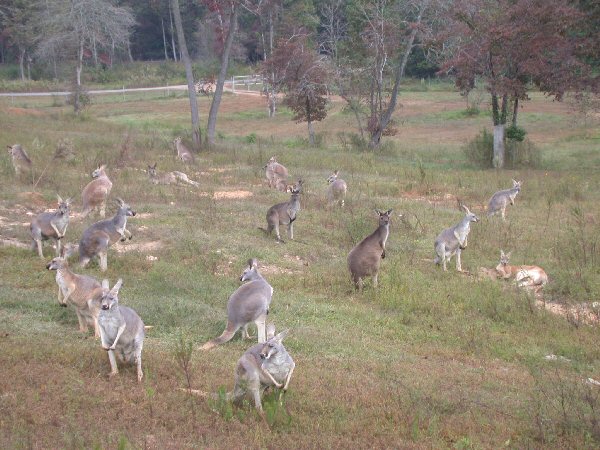 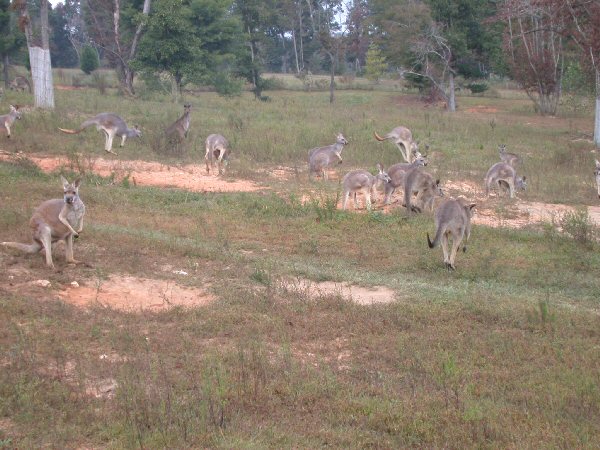 And then… gettin’ their hop on. 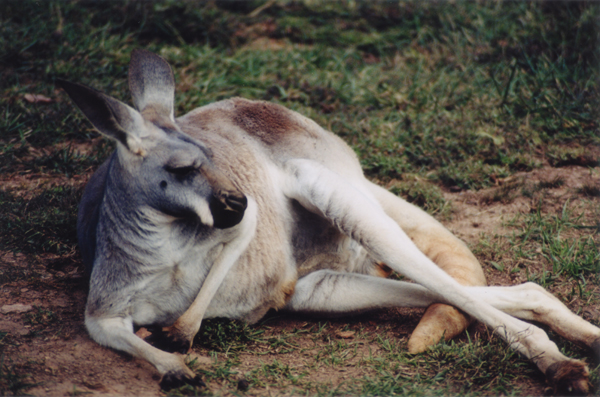 Mander with an excellent pic of a relaxin’ roo. 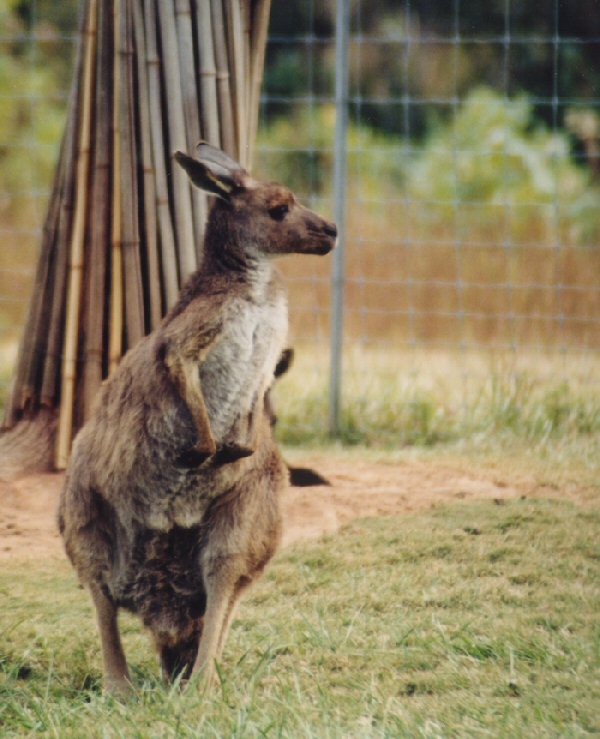 And an awesome standing roo, too.I’m a poet. I didn’t know it. My feet show it. They smell like ass. What? 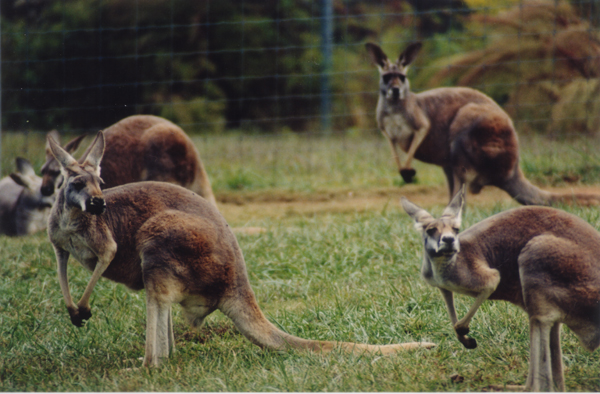 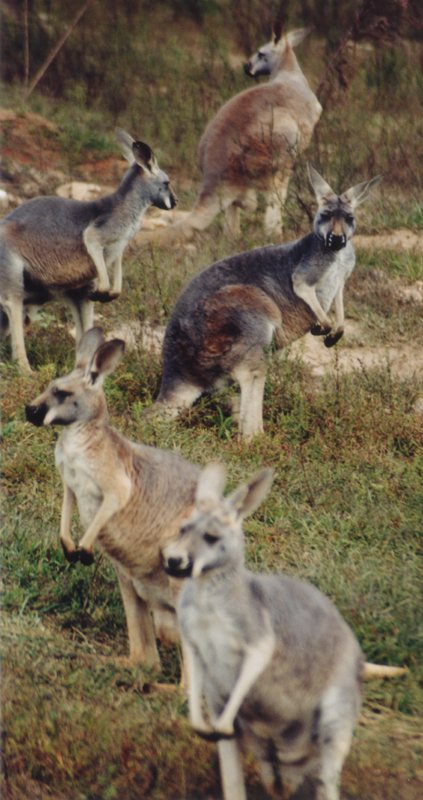 This, I think, is an incredible shot. 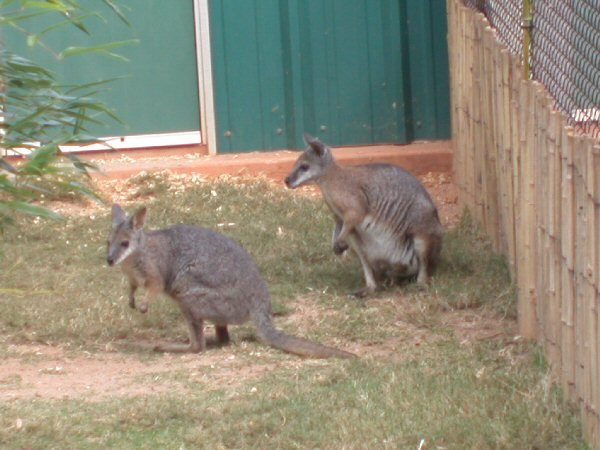 Back over by the barn, some wallabies that are too cute. 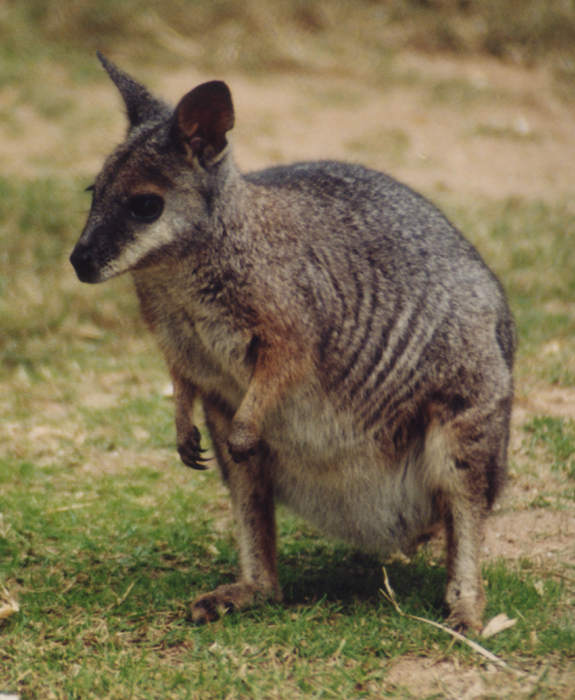 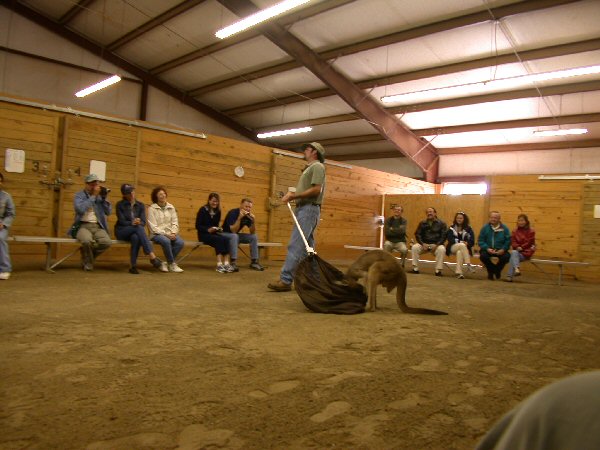 Back in the barn/auditorium we’re introduced to some of the locals, including this roo that loves to play with the net. 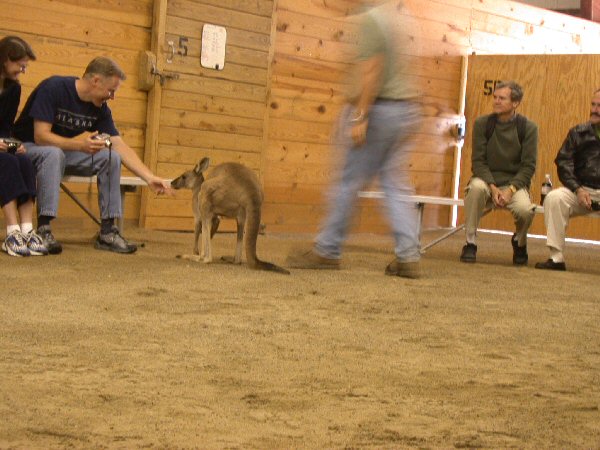 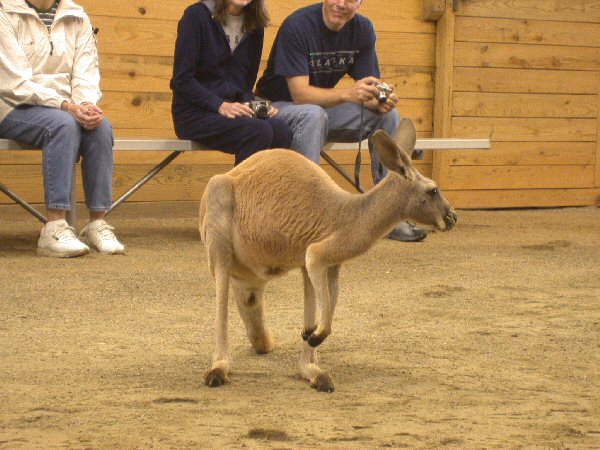 These are some wild critters. These roos have a gland in their chest that secretes a musk they use to mark their territory. As this one hopped
around we were encouraged to, ummm, smell the gland.
It’s crazy; the damn thing smells exactly like maple syrup! What’s even crazier is that, apparently, maple syrup is a relative unknown in Australia, and thus the Aussies think this smell is out right nasty. Me? It made my tummy growl for waffles. 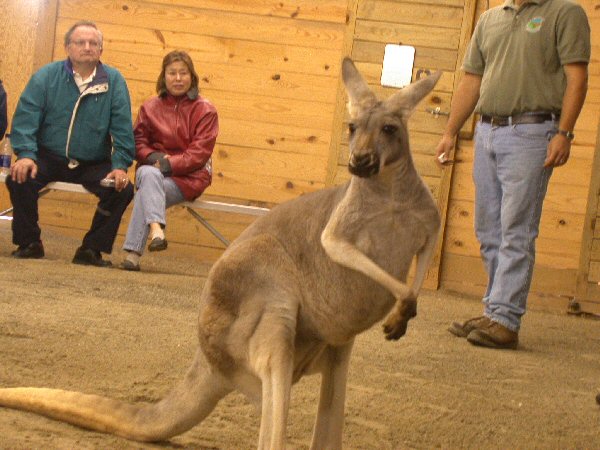 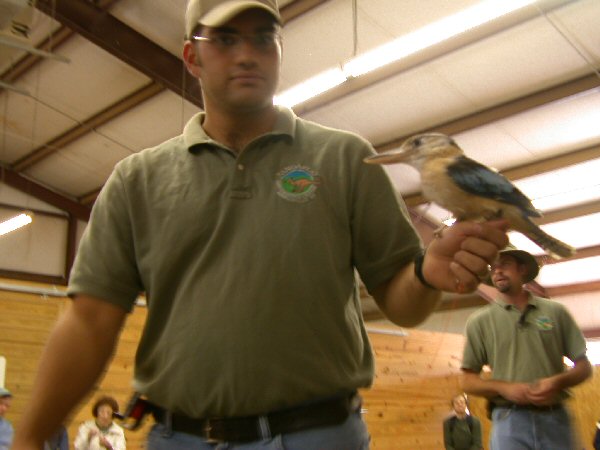 A fella brings around one of their 4 resident kookaburra birds, another Australia native. Apparently there are only a few of these in the United States, and they’re all right here at the center. They’ve been gettin’ they breed on, too! 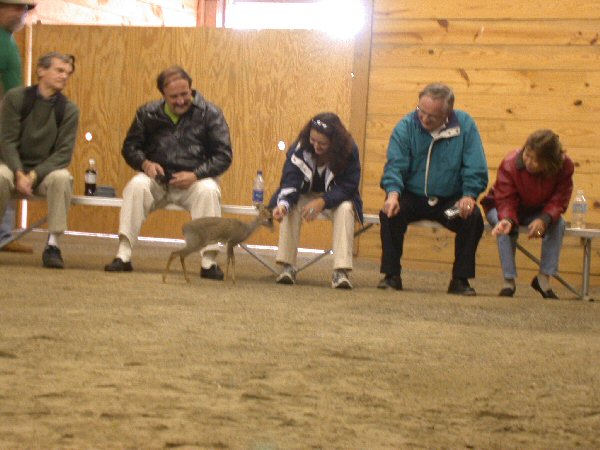 Next up, a Dikdik. A Dikdik is a little antelopey critter from Africa (Kenya etc). Why the Dikdik’s at a Kangaroo Center? Beats me; they never tackled that question. Nonetheless these are some cute little guys. He’s got these goopy glands beneath his eyes, and he ran around the circle of folks rubbin’ his Dikdik gland juice on everyone, claiming them for his own. ‘Course the folks that work here said “stick a finger out!” Apparently the Dikdiks are slowly but surely taking over the world.
There sure is an awful lot of gland talk goin’ on in this story, ain’t there? 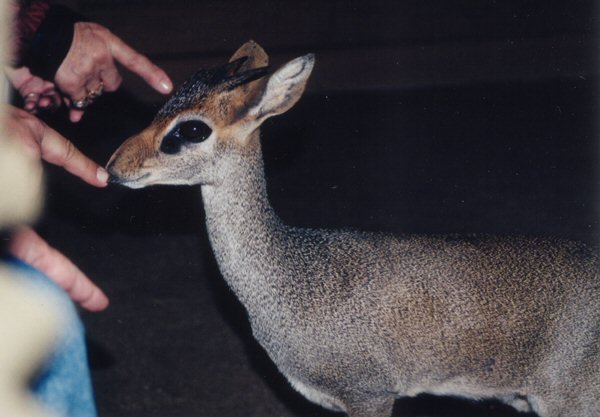 Double D has his pick of the fingers. Kinda perverse, hey? 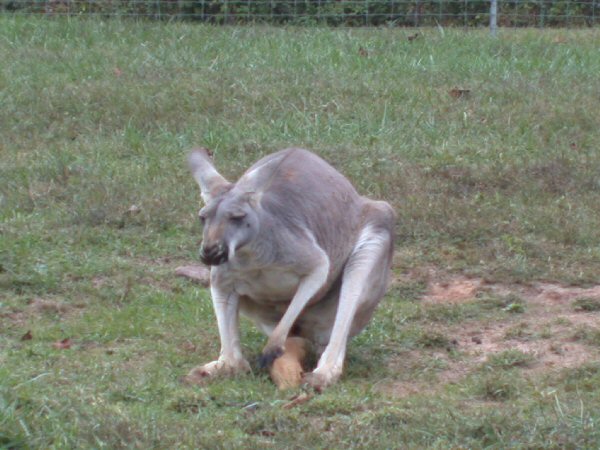 For the last bit of the tour we get to walk out into one of the fields housing a bunch of female roos. Tail sittin’ is a common sight. 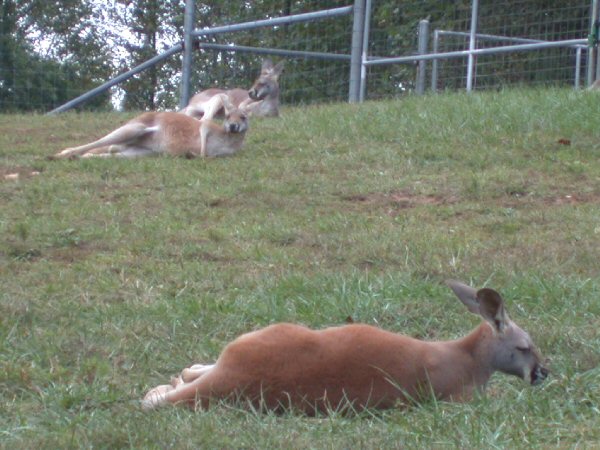 As is the full roo recline. 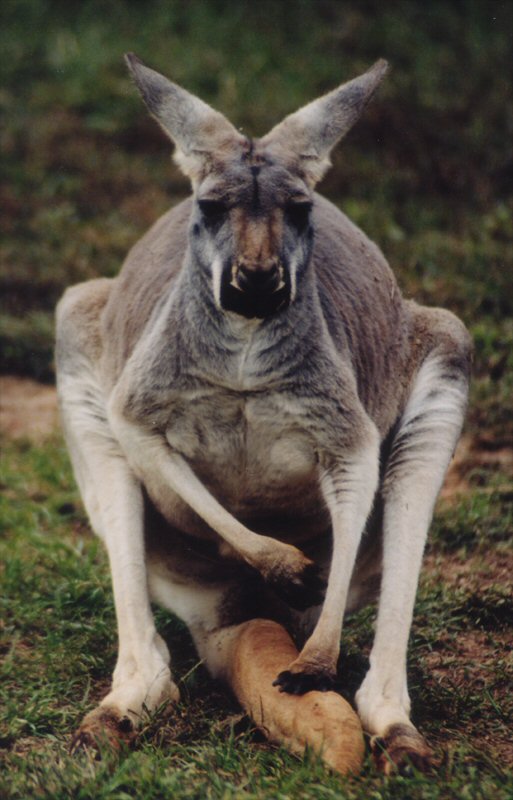 Amanda captures the tail-sit in its full glory. 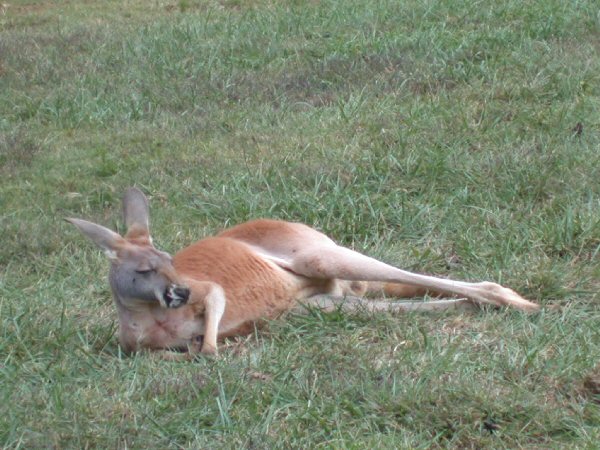 These are some laidback beasts. 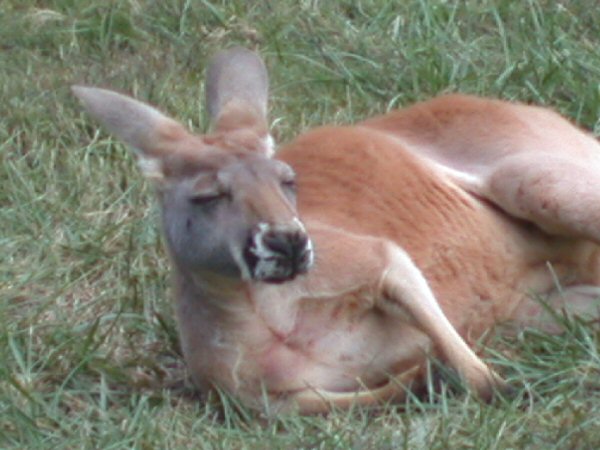 Oh baby! This one has perfected the Art of The Chill! Yes! 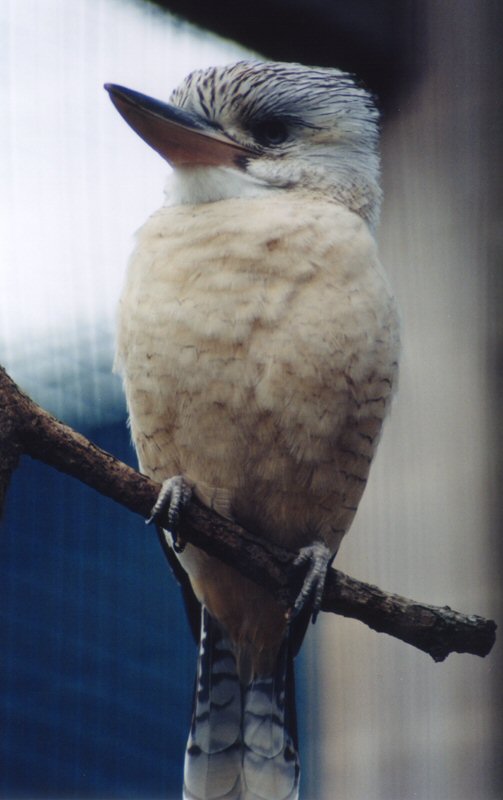 Mander shot some amazing pics of the Kookaburras. 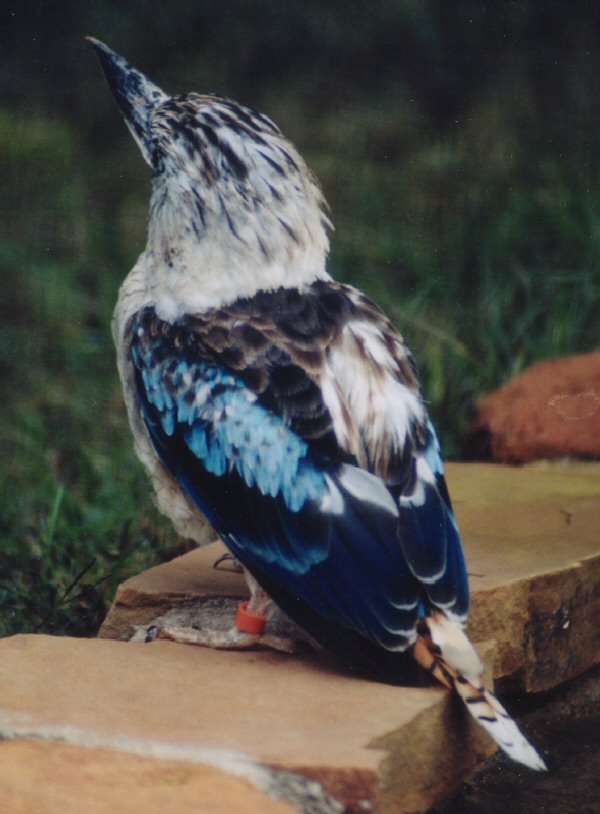 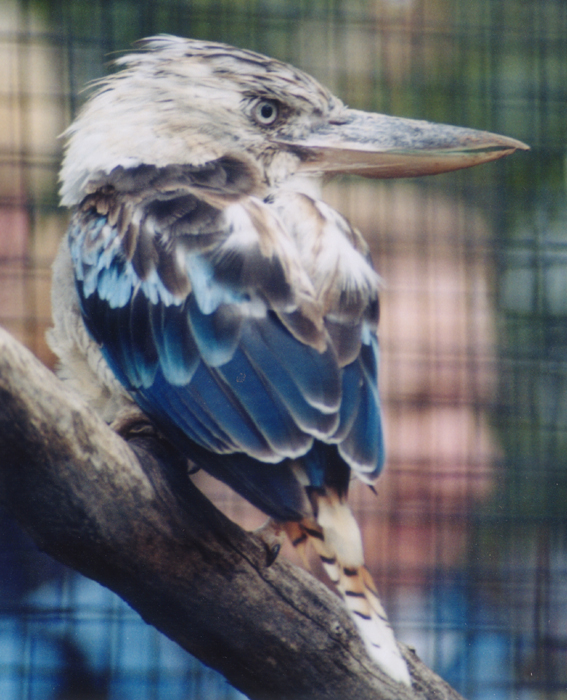 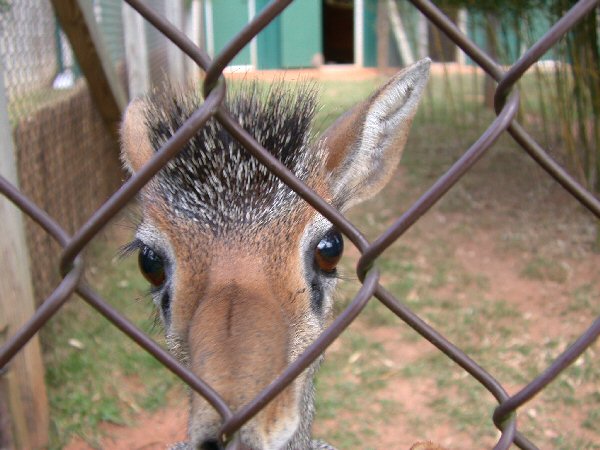 And, lastly, up close and personal with the Dikdik. See the little black pits beneath the eyes? Them’s the aforementioned glands. Stick out a finger; double D will gladly cram it in there and give you the gift of goopy goo. It’s the gift that keeps on givin’. 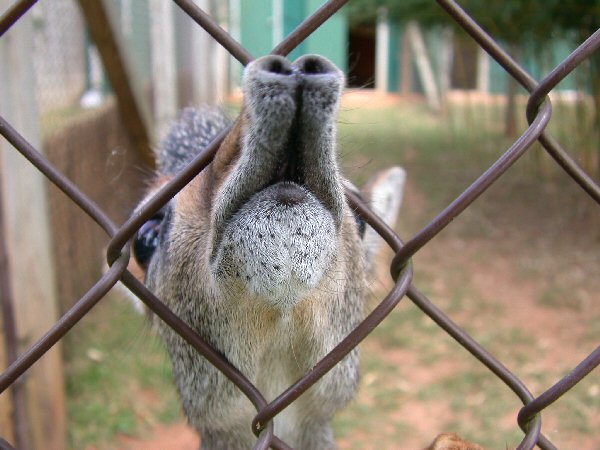 (Psst! Dude! C’mere! Help me bust outta this joint! You gotta help; I own you! I gooped you! Lookit yer finger! That’s right; you’re my bitch now. Now, grab them wire cutters, bitch! We’re goin’ over the wall…)

Big fun! I heartily recommend making the trip out to the Center; it’s well worth the $25 for the tour. This place is immaculate and, as you can see, the animals are in great condition. In fact, I’m thinking of moving in.