Clayton, GA — October 23-26 2003
We headed on up ta Clayton and its surroundings to hep out ole E-Rawk as well as generally just hang out and enjoy
not being in Atlanta for the weekend. Here’s the obligatory snaps! 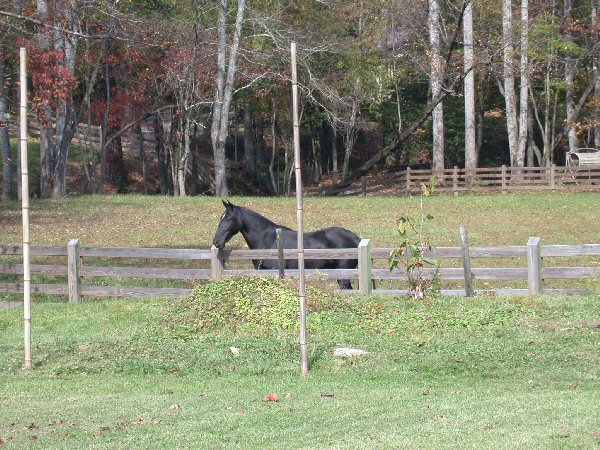 It’s the mighty Flashy Jewel, who makes her home behind the Chattooga Conservancy, where E-Rawk works. Flashy’s nose feels like velvet. The Sophinator does not dig the Flashster (or any other horse, for that matter), and set out about making her distaste known by hopping up on a nearby picnic table and barking like mad. Flashy was unphased. 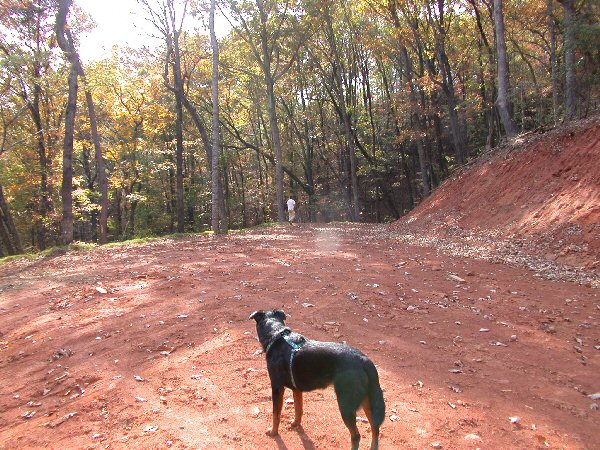 Sophicula surveys the scene, watching E-Dawg on his freshly graded land; purt’ near ready for house-buildin’. 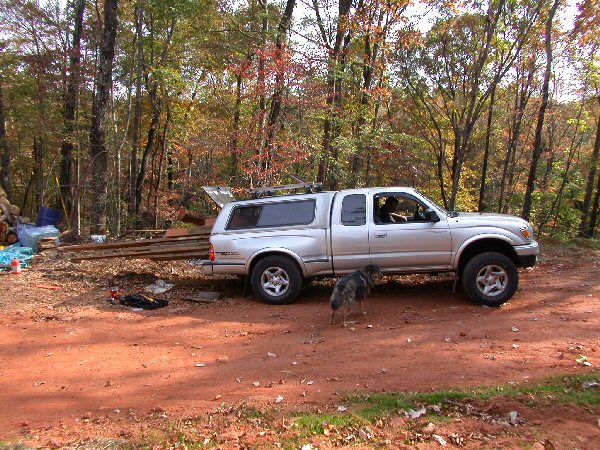 Muh faithful steed’s just a might weighed down by the remnants of E-Rawks platform, which was dismantled to make way for the grading. Ernie’s reprazentin’. 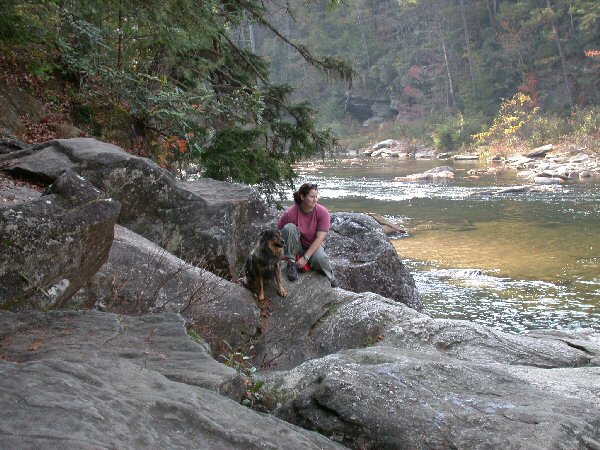 With the job done on Eric’s land, we headed off to the Chattooga river to do a little sightseein’ and hikin’. Mander and Ernie check out the river. Can ya see Ernie’s tongue stickin’ out? 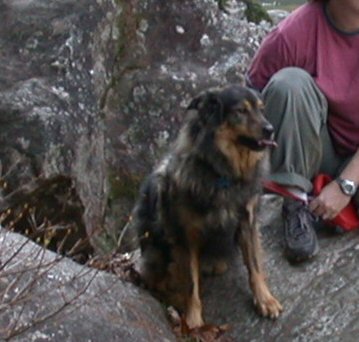 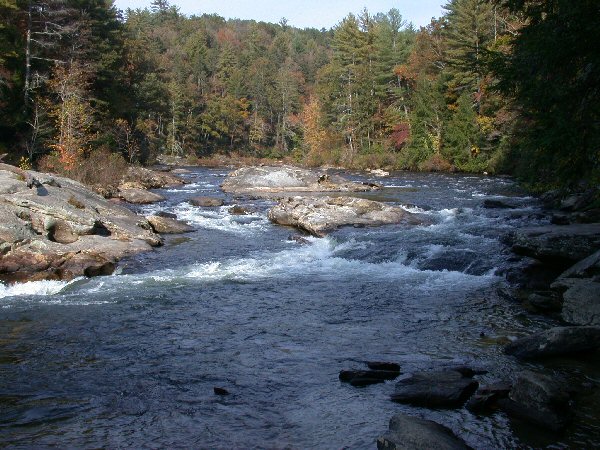 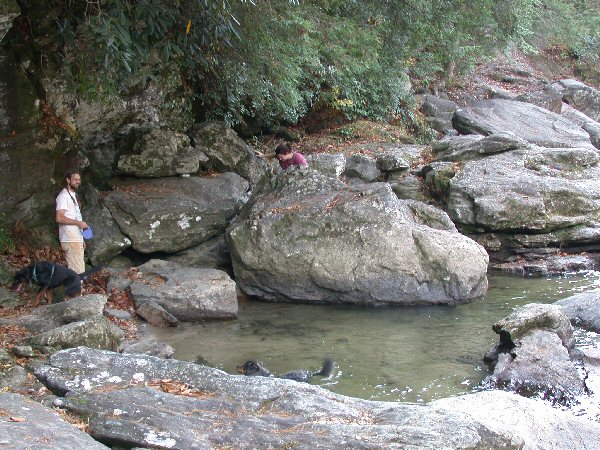 Ernie decides to go for a dip while Mander scrambles over the rocks. 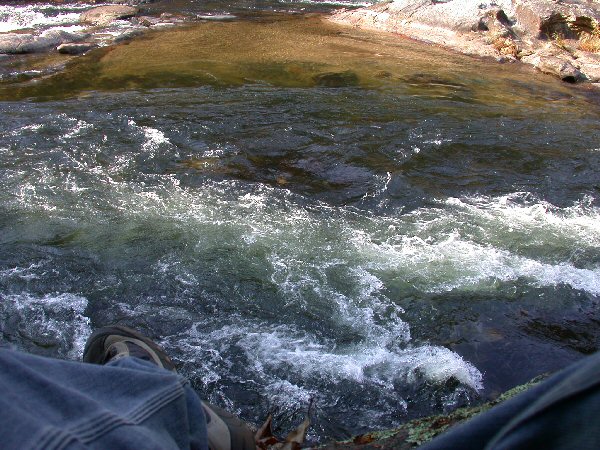 The Chattooga again… and my foots. 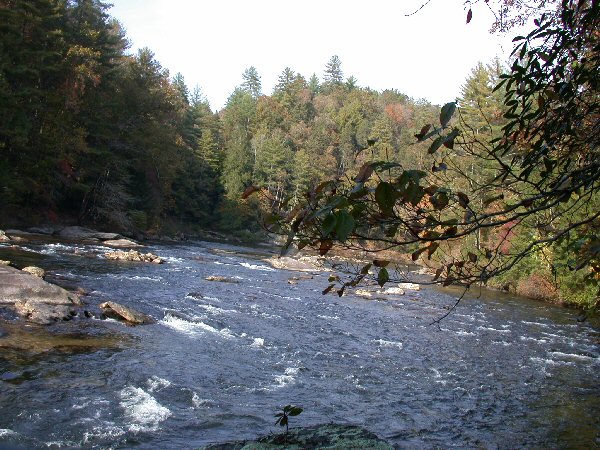 Purty. The leaves have begun falling already, so it seems we’re not going to get the typical colorful dramatics that normally come with fall. 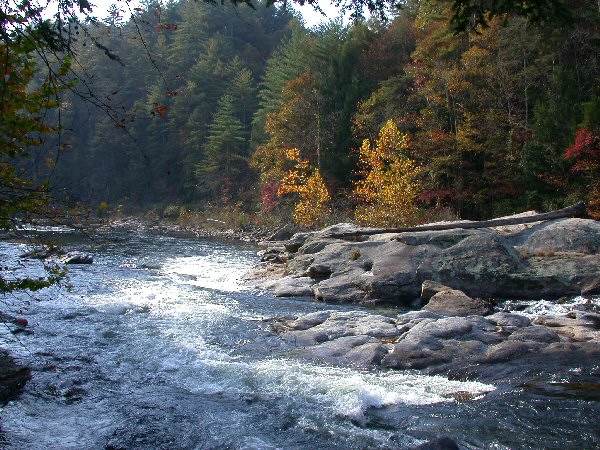 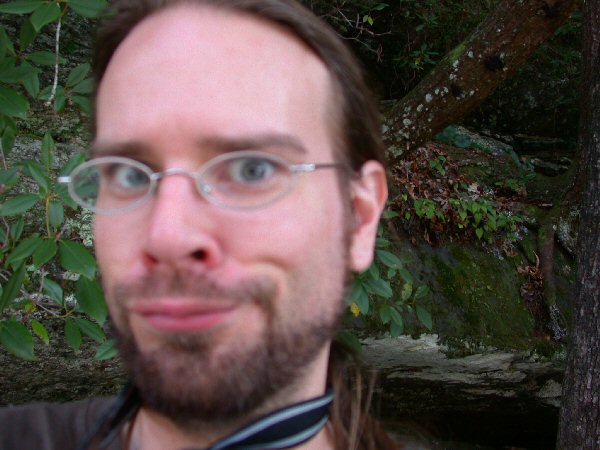 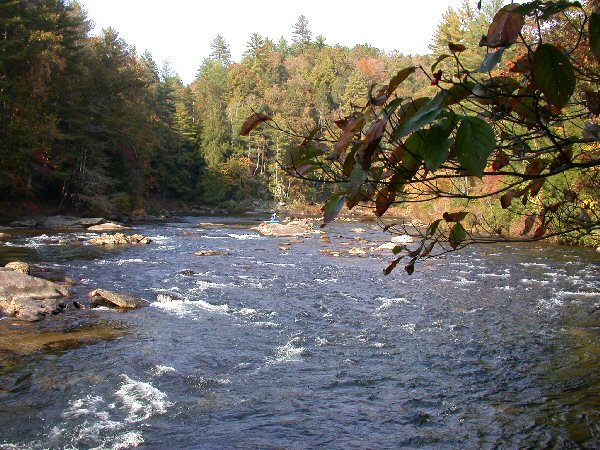 Got som kayakers headed this a-way (little dude in baby blue, center of the pic). These boys didn’t exactly impress while goin’ over the rapids near us. Feller lost his boat and his paddle. Meanwhile his cohort dangled a rope from a nearby rock, apparently as a safety precaution (he was more likely to get pulled on in hisself), which he promptly released as soon as his de-boated chum successfully grabbed. He then proceeded to sit down on the rock and puff a cig while watching his pal float on down the river, desperately trying to catch up with his gear. E-Rawk officially labeled them River Dorks. 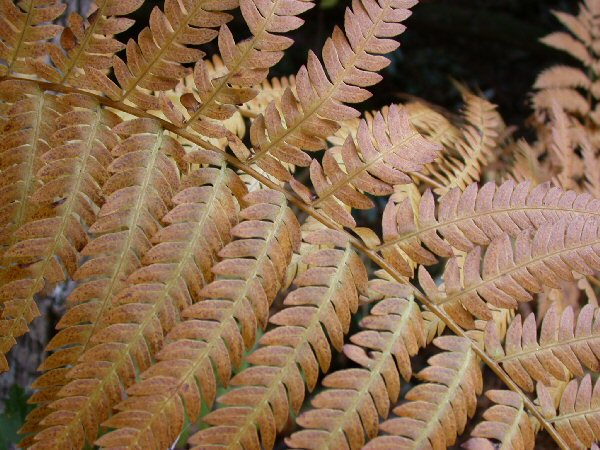 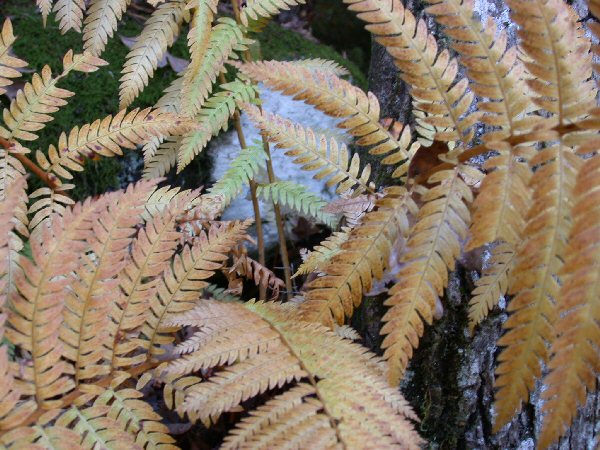 If you want to see another one of my uniquely cheesy panoramic slap-togethers, the subject of this one being the Chattooga, clickie clickie! It’s about 395 Kb. Guest starring E-Rawk and Demanda. You been warned.

So there ya go. Sunday we ate crappy breakfast at the abso-freakin-lutely slowest resturant in Clayton. Oh, the stories I could tell about the Kuntry Kitchen. Like the one about their “number system” that keeps you queued up, in the order you’re seated, through the entirety of your dining experience (we’re number 22, so we don’t get our order taken until the lucky 21 folks do. Likewise our drinks, food and check). Or the one about all the curt handwritten signs, on dayglo green construction paper no less, boldly proclaiming that “most food is made to order, so if you’re in a hurry, don’t eat here.” Heck, I’d like to get their recipe for water; given the length of time it took to get any it’s obviously a precise and complicated process. Or the little placard on each table that proudly advertised the newest sensation sweeping the land; battered and fried nuggets of macaroni and cheese. Don’t that just make your heart skip a beat and your sphincter pinch a tad just thinkin’ of the culinary decadence?
Anyhoo, it rained like mad, and the (accurate) prediction was for it to continue all damn day, so we said howdy to Buzz at the Conservancy and then posse’d up and headed home. Big up to E-Dawg for his hospitality, and to Dave for the use of his crib as a crash pad.