We rounded up the dogs and headed on up north to visit with E-Rawk over the holiday weekend. First stop; the Orr family homestead, where hospitality abounds and folks are so damn nice that they don’t get flustered when Ernie the Wookie gets it in his mind to take a shit right in front of the Christmas tree. With dawgs like that, who needs kids?
The next morning we headed out to E-Sheezy’s land to check out the progress on his new crib! 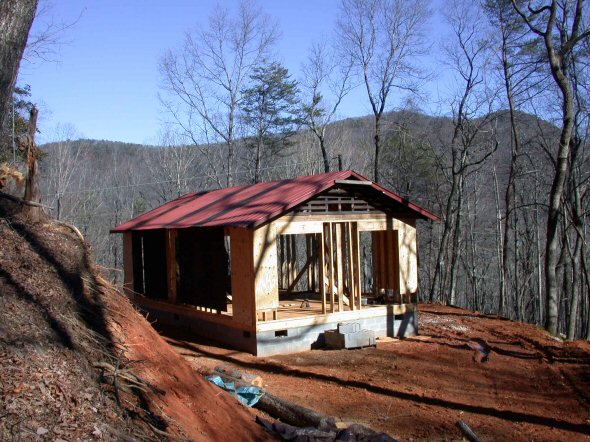 The Love Nest! Awww yea! Things is comin’ along. 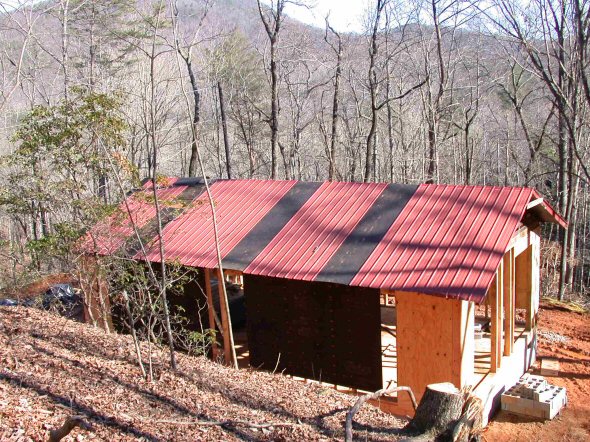 That roof used to be part of a bigass chicken coop. Recycling at its finest. 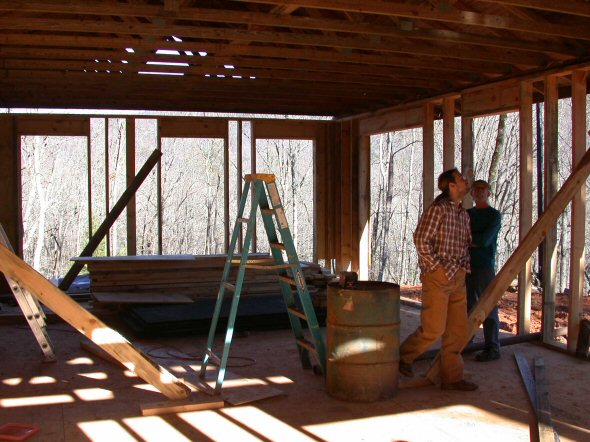 E-Wizzle and his buddy Michael survey the scene. Wizzle’s pretty sure that the new roof beats the ever-lovin’ crap out of the old tarp.
Right! Off to Aubrey’s crib. Aubrey is one of the folks givin’ E-Whassizzillizzle much appreciated assistance on the new abode. 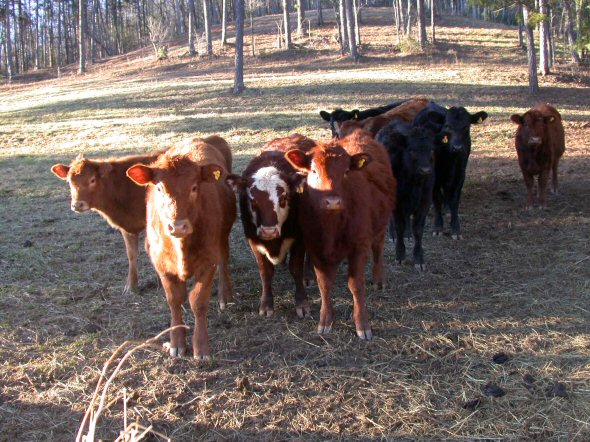 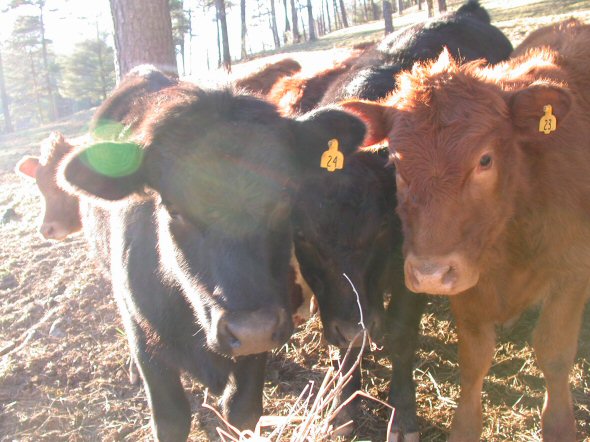 23 and 24 sneak in for a little powwow. They let us vegebletarians know that they’re goin’ over the wall tonite. 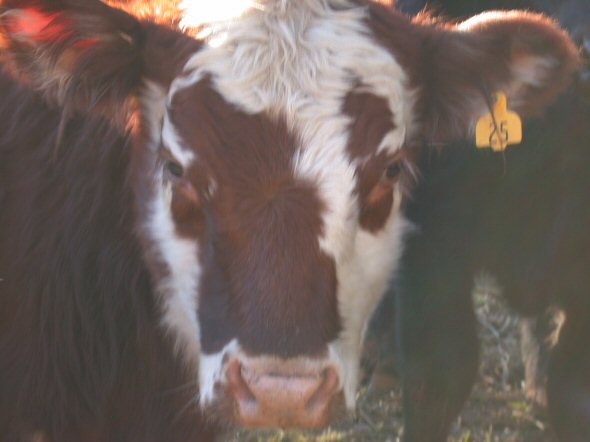 25 doesn’t know if we can be trusted with this information.We can. Udderly.whew. 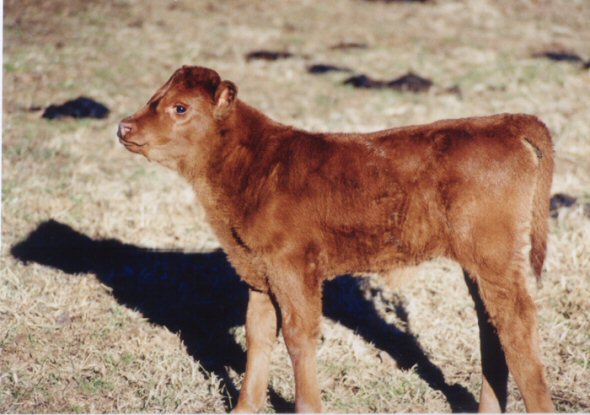 Baby moo. I’d crack a joke about veal, but it wouldn’t be appropriate… as this calf is outside in the sun, and standing.
Eaters of the veal can kiss all of my ass. 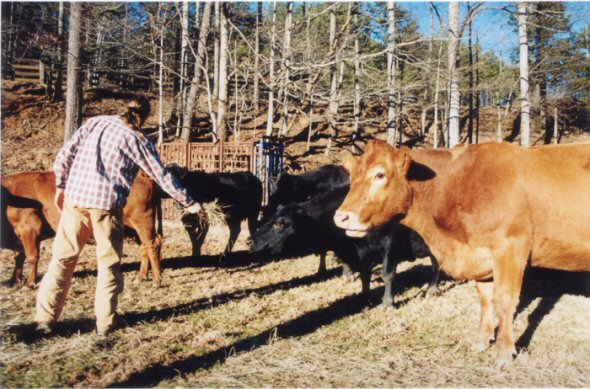 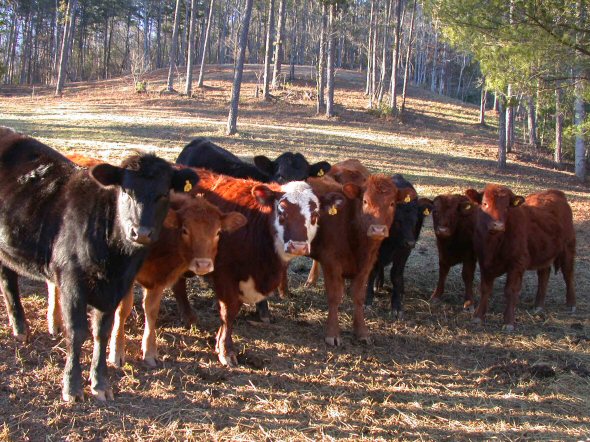 “Do you see the cow that stole your vehicle, Mrs. Grabowsky?” 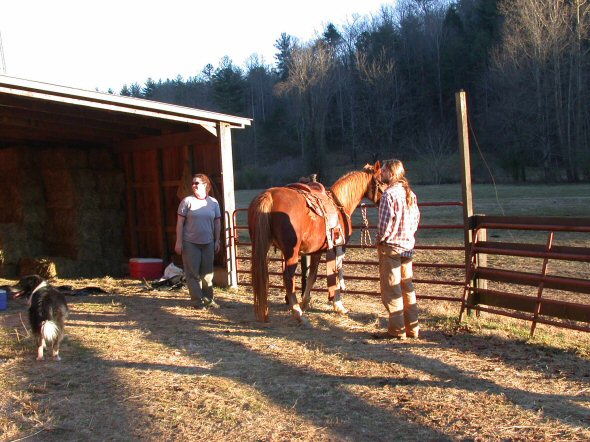 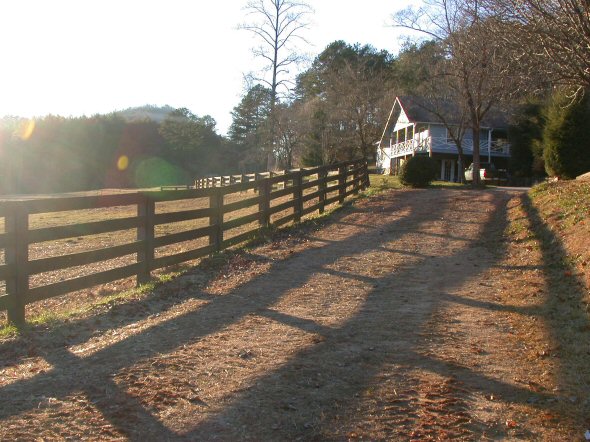 While they get the saddle cinched, lets take a gander over at Aubrey’s crib. He’s got a mack-daddylicious pond he and his son build behind his house. It’s fed by a spring that runs from further up the mountian. Very cool. 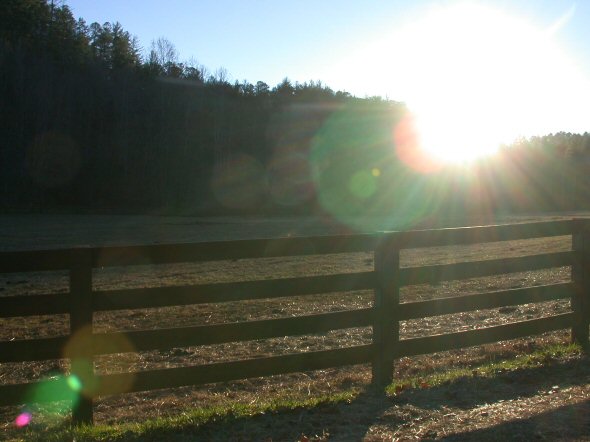 The sun, she is going down. 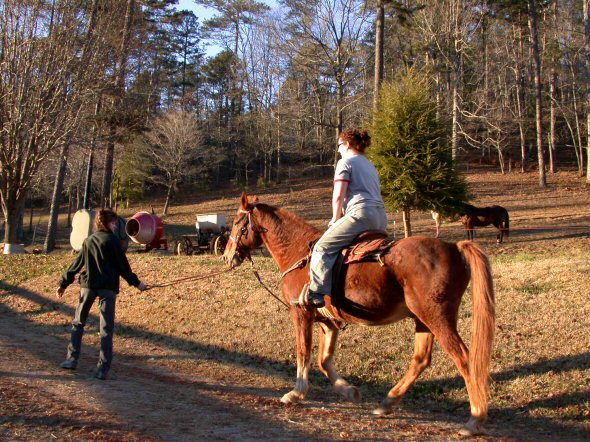 All aboard! Claudette leads Mander on her way. Claudette’s a champion rider, donchaknow. 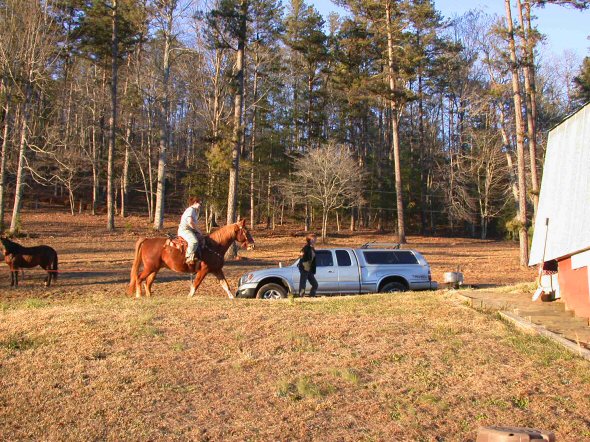 Mander passes my steed on her steed while other steeds look on in envy. 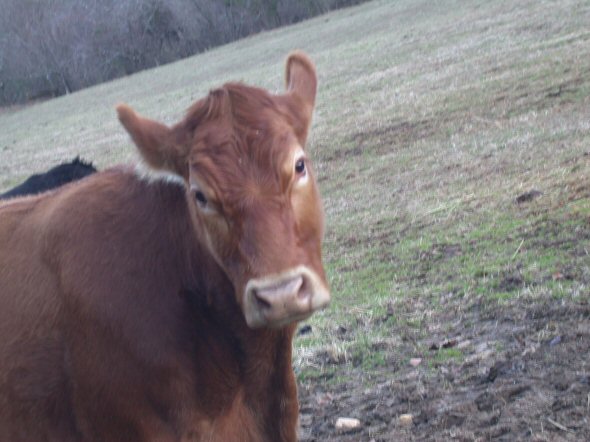 Guadalupe is not amused. 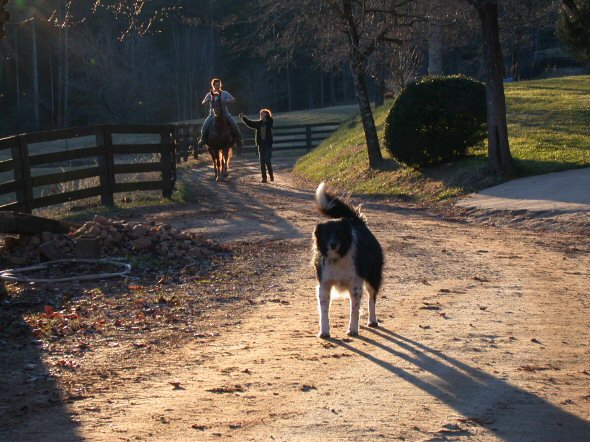 Here they come! That darn dog kept on bitin’ at my pantlegs, elbows and butt, tryin’ ta herd me. 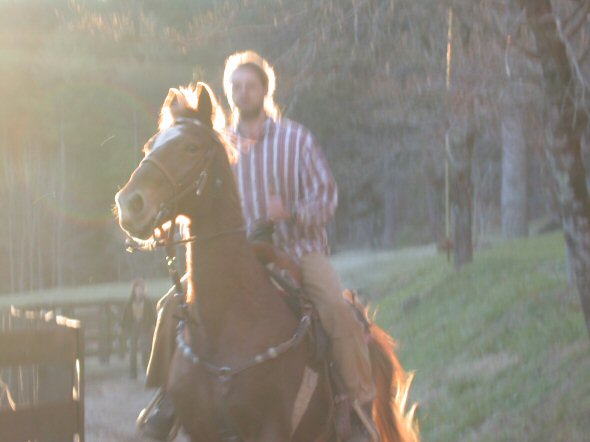 And only the staccato sound of cowboy boots on hardwood filled the air as the saloon fell silent. Word had it E-Wooly had ridden back into town. 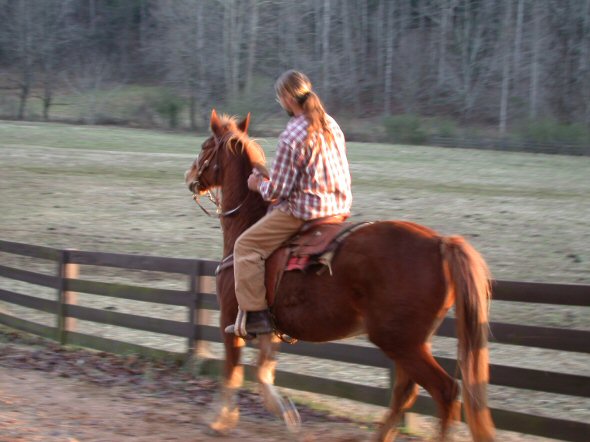 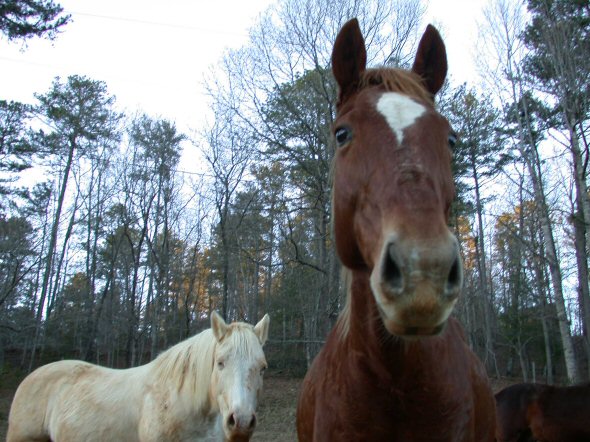 Back with his brethren. 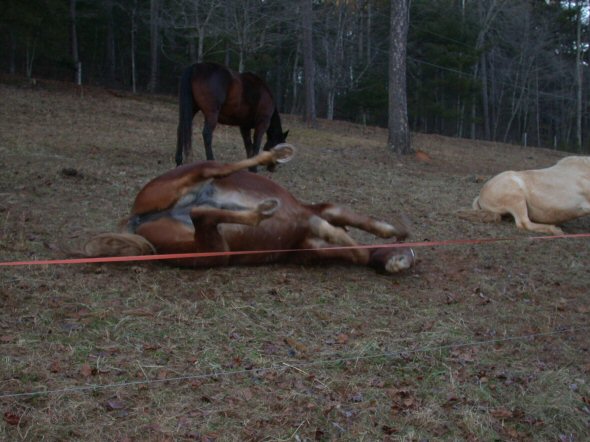 Tryin’ to scrub off the funk of city folk. 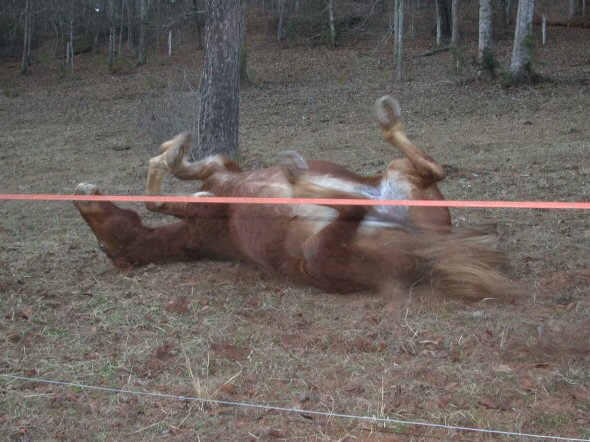 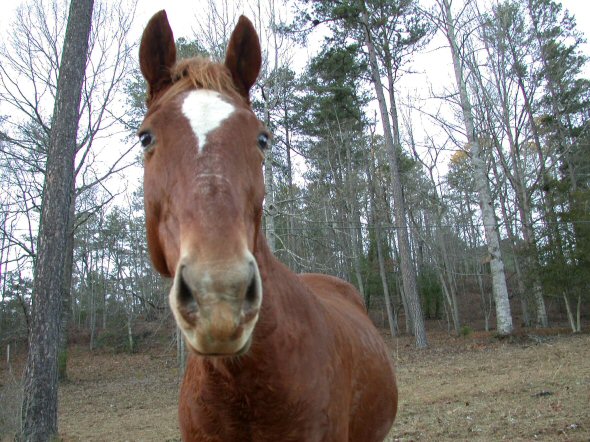 Better? Ok.
Later we headed off to Dave’s old crib to spend the night. See, Dave wasn’t supposed to be there, as he was headed to Vermont. But, turns out he hadn’t finished movin’ out, so when we met up with him unexpectedly there. Fortuitious for him, as we shifted gears and spent the evening helpin’ him move his stuff into storage. 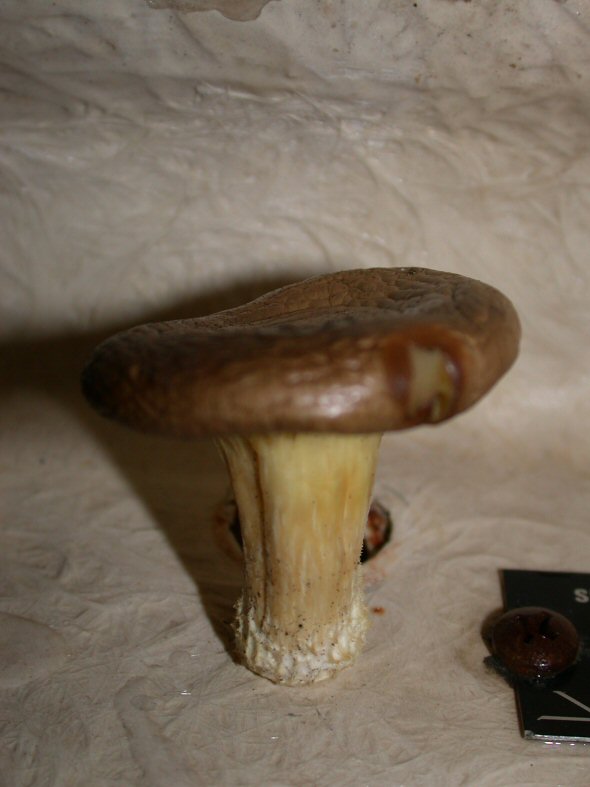 Dave got this kickass camper shell for his truck, see, and it was used… and occupied by this tenacious mushroom that managed to survive the cleaning efforts.
Tenacious Mushroom! 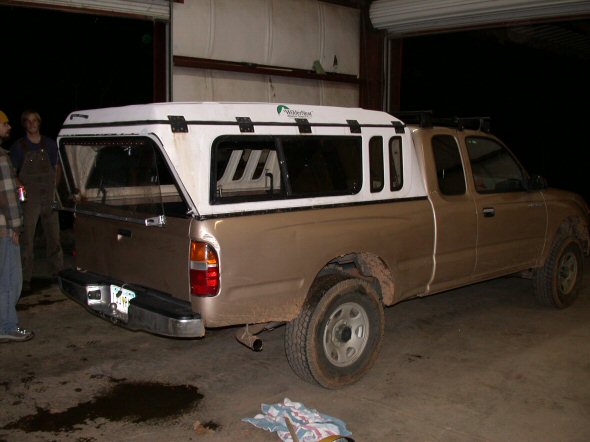 See? This is a camper shell with tricks up its sleeve. 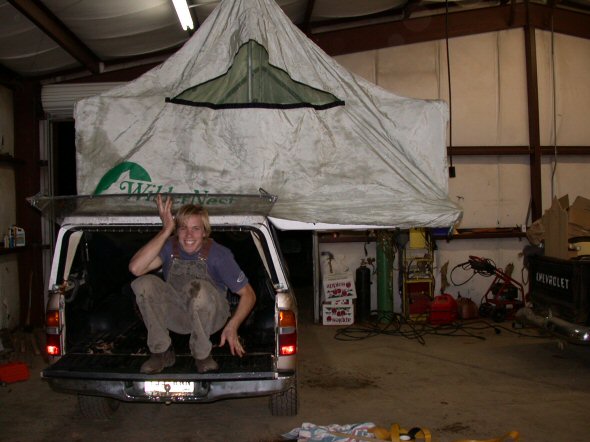 Check that shit out! I’m so jealous! It’s like a rollin’ condo! Supposedly that flat bit can hold up to 1000 pounds. Dave is obviously pleased with his purchase. 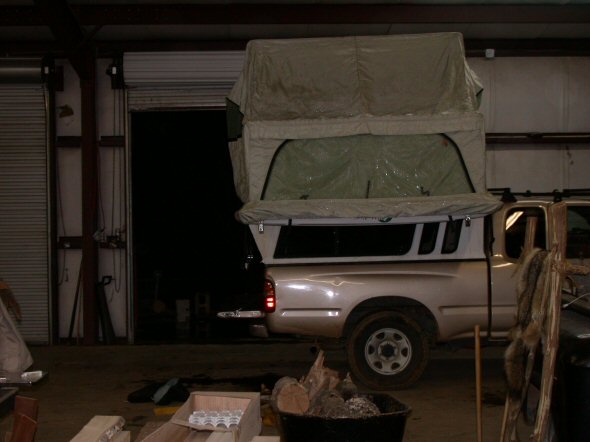 And from the side… that shit is dope! Unfortunately the company that makes these went out of business a few years ago. Dave got a mad deal on this puppy; my internet searches have priced out used ones for around a grand. 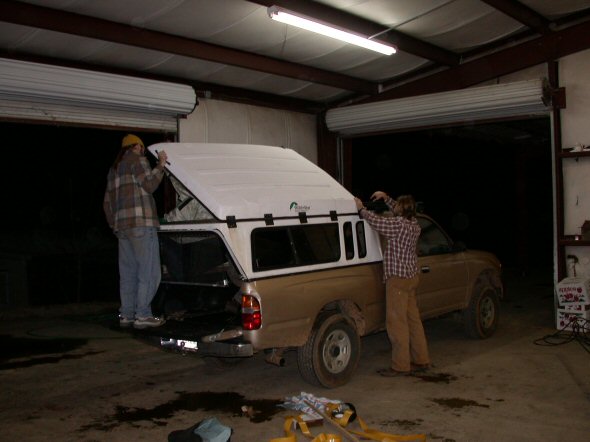 Gettin’ the tent back in is a little tricksy. 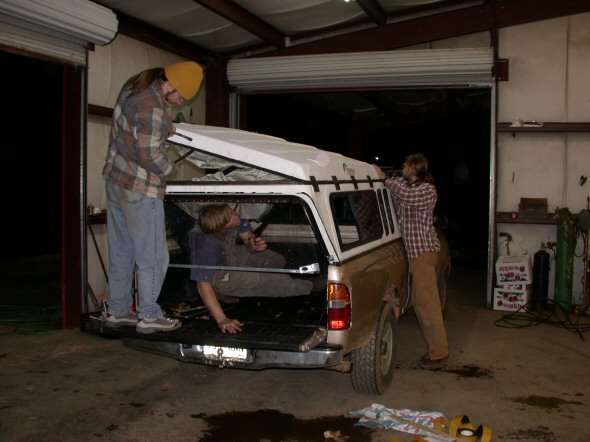 How many half-drunk fellers does it take to collapse this thing? E-Razzizzle wonders if he can make a porta-tipi for his truck.

In the end we got a lot more done for Dave and his movin’ than we did for E-Rawk and his crib. Still, a very good time was had by all, and it was mighty fun gettin’ to hang out with Dave and Mark.